The Mary Wallopers at Róisín Dubh 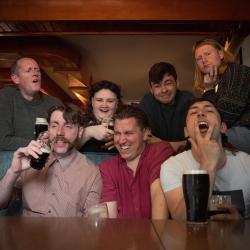 “Isn’t there hope for the country with The Mary Wallopers in it?” Tommy Tiernan

“Rabble-rousing… hilarious… the Dundalk ballad band are tapping into the political power of folk, punk and hip-hop” Irish Times

The Mary Wallopers -brothers Charles and Andrew Hendy andtheir friend Sean McKenna -started as a three-piece Irish ballad group traveling the length and breadth of the country singing & collecting songs. Their early live performances exuded a raw energy best described as Dead Kennedys meets The Clancy Brothers, and their first five track EP -2019’s A Mouthful of The Mary Wallopers -perfectly captured their sound and ethos, one filled with warmth, intimacy, chaos and enough sparks ready to light any fire.

When COVID decimated the music industry and canceled all live music, the first band out of the blocks were The Mary Wallopers. Unfazed by the global shutdown, the three Dundalk men built a pub/studio in their house to connect with their fans again. On St. Patrick’s Day 2020 they became one of the first bands in the world to host a livestream.Although there were countless attempts to get live-streaming right during the pandemic, very few matched the Wallopers efforts. Armed with a DIY attitude, they performed live in their homemade clubhouse, creating broadcasts that felt like Wayne’s World soundtracked entirely by Irish ballads. The show brought some much needed joy to the 40,000 people who tuned in live. As the streams continued, their audiences both home and abroad grew, allowing them to book their first UK headline tour.To capture the chaotic energy of the livestream, the Wallopers expanded to a seven-piece, including Roisin Barret on bass, Brendan McInerney on drums, Seamas Hyland on accordion and Finian O’ Connor on tin whistle.

When lockdown restrictions lifted, the band pickedup where they left off, playing to ecstatic audiences of 1500 people a night at two sold out gigs at the prestigious Vicar Street in Dublin beforeblazing a trail through the UK, ending up with a raucous sold out date at the Powerhaus in Camden.With their debut album on the way in October and a massive tour of Ireland/UK and Europe, The Mary Wallopers are taking their unique and joyous vision of the historic music of their home country out into the world.